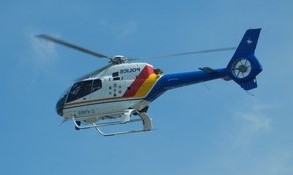 Helicopters have been going back and forth across Mount Erskine where I live on Salt Spring Island. One was flying particularly low, moving methodically back and forth. I was working in the garden tried not to get thrown off my bean planting with all of the thudding through the trees. They were looking for something.

I squinted up through the canopy of green and stared at it. The helicopter was huge and the colours
seemed vaguely familiar. Then it came to me. It was the same banding as on a squad car for the RCMP.
Well, it must be something important to bring out such a big bird.

I asked a couple of people what was going on but nobody knew. Later I noticed the article on CBC news. A sociology professor from UBC, Sinikka Gay Elliott, was missing. Her car had been found a block from my house. The local news exchange said our Country Grocer was donating sandwiches to the Search and Rescue. Locals were asked to stay out of the way to let the pros do their work unhindered. In nearby Portlock Park, tents were assembled as hundreds gathered looking for her. Search and Rescue came from Duncan and Port Alberni and beyond. I heard from a friend yesterday, it was thought she was depressed.

It could have been suicide. Or, she could have been hiking and injured herself but it was not a good sign we were on day three without finding her. A cougar could have gotten to her. Or maybe she was abducted and goodness knows what.