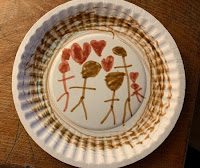 Samain literally means "summer's end" and as Halloween approaches this blue moon, I find myself hunkering in, for the wind is howling about the house this morning as if seeking entrance, while the power flickers ominously. Mushrooms are appearing on the property like alien life forms, fantastical and misshapen. The cedars are throwing down their branches littering the decks as leaves fly wildly.

Trying to keep my spirits up, like everyone else on the planet, I was happy when my daughter forwarded a picture my grandson had drawn. He has not seen me in over a year. As with many grandparents and due to Covid, the usual travels back and forth across the country have ceased. For a project at school he drew his family and lo, I am the red figure to the left. It is a great honour given the number of family he had to choose from. As his grandmother, I am not forgotten and look, it has hearts. This is frisbee love.
Posted by Maryanna's Blog 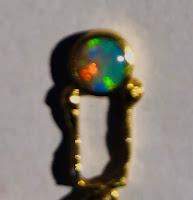 I had something lovely, an opal necklace, given to me when I got married. It was from my parents-in-law. I wear it often and deeply treasure it. When I got home I was unpacking as one is wont to do, and realized it was missing from my bag.

I felt sick. I thought back to the steps I had taken and knew it was gone. Have you ever gone through this? Lost something precious and tried not to feel awful? I realized it was a small stone but it was given and received in love. I felt bereft.

I though about the forest fires on the western American coast and of the people who had lost everything in the recent rampage, and contemplated loss for a long while. I still had my  home and many did not. I let go.

A day or two went by. I was standing in my bedroom. At the exact moment I was considering revisiting the coffee shop, one ferry and three hours away to look for it, my eye caught something. There it was. By my bed. On the floor. The very opal.

Oh my. Don't ask me. I haven't taken it off since.