“Rambling rose, rambling rose,
Why you ramble, no one knows,
Who will love you, with a love true,
When your rambling, days are done…”
Song by Noel and Joe Sherman


I think I am getting somewhere with all of this rushing about. It is as though I have gathered together the memories of my past in this journey through the provinces of Canada where I used to live and where my ancestors dwelled. I most distinctly have had the sensation that as memories came to me, I drove away from varying campsites and towns with it all resolved somehow, leaving the residue of what was behind, with difficult lumps dissolved. In the return it is as though I am gathering. I am pulling in what I want into my life. It has been a releasing and a gathering, in the going forth and in the return, through this beautiful land.

I have been listening to Clarissa Pinkola Estes, PhD, and in her Mother Night audible discourse she likens the generational wound that we all carry, to a patchwork quilt. Some squares are very beautiful, others are old and need mending, and some, one simply turns over, with threads of repair pulling it all together. I have stitched the quilt of my life together in the mosaic of this majestic country, repaired a lot of squares, turned a few over, and I am prepared to rest content beneath its beauty. Such has been this journey. 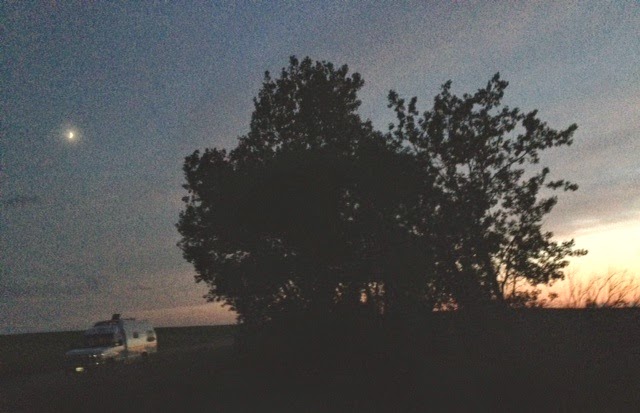 
Mrs Fox: Why did you lie to me?
Mr. Fox: Because I’m a wild animal.
From the movie, "Fantastic Mr. Fox" by Wes Anderson, loosely based on the story by Roald Dahl.

I am in an expanse. It seems endless. I have succumbed to the charms of Northern Ontario, of the trees and lakes here. The parks are quite wonderful, usually centered around some geographic feature of beauty and always well managed and staffed. It all seems Group of Sevenish, the lakes, the rivers, the storm tossed waves, the palette of the landscape.  I have never seen a fox in the wild before but yesterday, there before me, was one. He was lying in the middle of the road, sunning himself. I stared carefully, taking in the silhouette as he stood and stretched and lay back down. I thought what perfect camouflage being right out in the open. How brilliantly bold, really. Last night I slept by a big old pine tree, a huge moon sailing through a star lit sky in an expanse of deep blue. I awoke at three in the morning and, with a doggy bag firmly clutched to my bosom, I decided to walk with Lexie to the “Comfort Station”. In the full moonlight, a fox crossed our path. He sat in front of us and started, well, not exactly baying, more sounding like a dog with a sore paw, a sound that starts out as a bay and then kind of short circuits. Fortunately, Lexie stayed quietly at my side, she did not bark, for we were amid sleeping campers. I kept standing there in the night under the moon waiting for the fox to give ground so we could pass but no, he did not. He just kept up with this terrible rackety howling. I backed up. He still kept it up and I almost had the feeling he was considering a charge. I conceded. You win Mr. Fox.

We reversed our course and walked the long way around, my feet crunching along the roadside, past the snores of sleeping campers, as I nervously eyed the rustling vegetation beside us. This morning I packed up and drove to a picnic spot for breakfast. I write this by a beautiful lake where I hear the cry of eagles. I have just looked up from my crumpet to espy yet another fox, casual as you please, all red tipped on tail, paws, and snout, with a snowy white chest prancing in front of me. This is three times a fantastic fox has crossed my path. It must mean something terribly important but exactly what escapes me.

Farewell to Nova Scotia… the sea bound coast… I am surprised I am still alive after eating the New Brunswick ferry clam strips, to tell you the truth. I am still waiting to see how it is going to go. In the interim I find myself in the most delightful place. I had just been thinking about the movie Kamouraska based on the book written by Anne Hebert when I find myself here as I travel the Bas Saint Lawrence. Everything is so beautifully painted and artistically arranged, even the tractors. There seems to be photographs everywhere I look and I feel I might as well just get a movie camera rolling. Church spires and silos form a backdrop to rolling fields growing corn and other crops, and on the other side of the landscape one sees the beautiful blues of the Saint Lawrence revealing varying and interesting islets.

The architecture of the Kamouraska region is said to be among the most beautiful in Quebec, influenced in part by the ship building culture. Kamouraska itself is so very charming and I find myself totally captivated. It was originally built in 1759 but when the British laid siege to Quebec City they burned Kamouraska and other towns along the southern Saint Laurence to the ground, leaving nothing. The town was again rebuilt after a fire razed it in 1922 and the curved rooflines are a distinctive signature of the homes here. I am very much entranced by the loveliness of this coast line and I am once again surprised at how comfortable I feel here. It must be the ambiance. It could be the cheese.

As I travel now, I find I am looking very much forward to a reunion with my family which is soon and seeing how much my grandson has grown. Lexie has been a remarkably good traveler. I very much appreciate all of the lovely notes and comments from all of you who have been following this trip. It has made me feel like we have been doing this journey together and I have felt not alone, but in the company of good friends. This blog has been written in campgrounds or coffee shops, tapped out with hardly any power, with intermittent internet. Often I think, geez, I misspelled that as I have no time or means to correct. No matter. It has been fun. It feels good to be heading west. Thanks for being here with me.

I have driven the western coastal shore surprised by the dearth of folk, the moss growing on the road, and some homes literally just abandoned. Bypassing the city of Halifax I have come like a homing pigeon to a place my mother loved near Peggy's Cove and stayed with good folk here who were friends of hers and also now of mine. Much to my astonishment, I learned that my mother did the identical trip around Cape Breton that I just did. It was not even conscious on my part that I was seeing the country she loved. I learned in my stay here of the tragic Swiss Air Flight 111, a plane with over 200 passengers that came down in the waters here, the story of what happened and the impact of that on the local communities. The memorial, within walking distance, is haunting and is as lovely the land is, the two together much cause for huge pause. I managed also to visit the famous Mahone Bay, which reminded me so much of Salt Spring except with a hundred more years of history. I stopped at the market there and strolled by a lot of pirates and frigates, (it was Pirate Day in honour of the rum running and various other nefarious
activities this area is historically famous for). Lunenbourg was a surprise, so medieval and charming and very much in varying stages of restoration and decay. Founded in 1759, it is so unique that the whole town is a UNESCO site. I felt like I was in a Walt Disney set except it was real. I was visiting on the most tourist driven day of the year and driving the narrow streets were a huge cause for alarm as I was worried the van mirrors were going to knock somebody out. I felt I was unable to do the place justice. Upon coming back to the Peggy's Cove area I was entreated to an amazing lobster supper from my friends with big hearts.