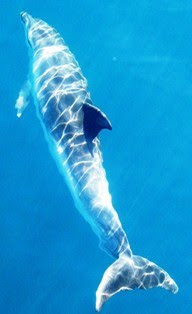 Abel Tasman, the Dutch explorer, first came here and left very quickly when some of his crew were killed. Captain Cook was a lot smarter. He came with a Tahitian guide (captive?) who was able to communicate with the Maori and it went quite well. There are 144 islands in the bay. The waters are clear and turquoise and laced by scallops of lovely sandy beaches and are incredibly warm. I have been sailing and kayaking here. The kayak guide was a young yahoo that scared me half to death who talked like Crocodile Dundee. When we returned to land I practically kissed the ground. I was so very blessed to see these dolphins from a launch yesterday morning.

Aren’t they incredible? They were 5 or 6 feet long, and they are so giving, so joyful, and so full of play. They leaped in tandem in front of us and some rolled right below me. You can see the photo on the bottom, I felt like I was being given a good look in the eye and being thoroughly checked out. My heart went out to them. They are so absolutely beautiful. Orcas were here yesterday as well. I was told that they like to take the liver of the manta ray as a delicacy and leave the rest of the carcass. They will also attack dolphins if they can trap them in bays. There was a photo in the paper here of dolphins sliding down the snouts of humpbacks in Hawaii, maybe you saw them. Quite amazing. These are Bottle Nosed Dolphins. 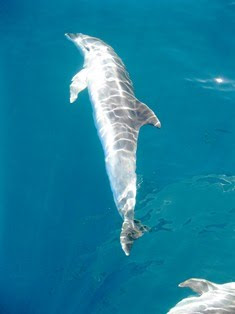 When I say I am north you have to factor in that it is the opposite of our experience. North is closer to the equator so that translates to more tropical conditions. I have seen palms, lemon trees and well, orange sheep. The New Zealanders love to pull your leg but I verify I saw the sheep with my own eyes. They were definitely orange. “Don’t be a nana” means don’t be like a wimpy grandmother. The other expression I heard was my company is “tighter than a snappers butt” meaning cheap. I am readying to go to Waiheke Island near Aukland and then I leave this fair country to fly to Tahiti for the final leg of my journey, the Marquesas, in French Polynesia, via a supply ship. 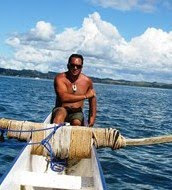 Summer is coming to a close here and in another week it will be fall. I had heard that this was a sweet coastal town in the north and so I came here.

It is the site of the ancient treaty grounds. I have been reading in New Zealand’s The Herald about this treaty in an article by a Maori journalist. Of course the treaty is rife with the usual forked tongue business. I would have to say though after visiting many places and also taking my own country into account and where for some reason the issues are identical, this being a hallmark apparently of colonialism, that this country clearly has been the most successful in integrating an indigenous culture in a respectful and comfortable way. Everybody benefits including the tourist or traveller. The New Zealanders of United Kingdom heritage, for the most

part, know a great deal about the Maori, speak it in part or at least are familiar with the vocabulary and readily and respectfully share it. Even the beloved rugby, All Blacks, chant the haka. Today I was so privileged to go on an outrigger with a Maori man named Nick operating his own business. We paddled, swam, snorkeled, sailed, caught fish, ate raw sea urchin, cooked and picnicked on the beach, saw dolphins and just generally had a good time. I just loved it.

I am ticketed out of this country so I return with pleasure exploring the north island. I love the feeling of anticipation before seeing a new place.

I am glad to be here, the pure energy of the land and the people are so welcome. I realize anew the many reasons I have been called here.
The trip to Cape Rainga was through mist (this is called the land of the long white cloud for a reason). The sun repeatedly broke through with dazzling rays. I saw a white rainbow. I did not know this was even possible.

We drove to 90 Mile Beach, literally, racing beside the ocean for many kilometers. We then drove up a dried river bed to sand dunes.

Here people surfed down them. The day was brilliant and the mists burned away. Unfortunately, a young Scottish woman came down a dune and smacked into a car. We were worried she was terribly hurt as there was a lot of blood. An ambulance was called. It had to come from 200 miles away. She was alright when she was cleaned up and was very fortunate she was not mortally injured. It cast a pall on the day and in a more somber mood we continued to Cape Rainga.

This is a sacred spot and we were asked not to eat food here. It was a high bluff with a lighthouse, where the Tasman and the Pacific meet in a cross fire of surf. It is said that the spirits of the dead gather here to depart in the hour before dawn to return to their homeland of Hawaii. The company took us out for fish and chips and paid for our dinner as we were late and also to compensate for the difficulty of the day.

I am enchanted again by this country, the top as lovely and interesting as the rest. Vents of steam escape from grassy areas without comment – this is just how it is. Pictured here is boiling mud which I visited– it is fairly common in addition to the steam vents.

It is a bit of leap I know. Sometimes I even surprise myself. There is an old world charm here in Buenos Aires that hints at deeply ingrained culture, breeding, courtesy, protocol, and the grace of all that is civilized.

It is quite subtle. I really like it. Some of the European history here is older than 500 years with a bewildering catalogue of struggle with borders and invading European countries. What becomes immediately apparent, aside from the tremendous wealth that is here, is that I have the wrong shoes. I need heels. I need…… yes, I need, TANGO SHOES! The Latino rhythms, swarthy complexions, smouldering eyes with deeply banked, combustible heat, Italian cadences and colloquialisms intermixed with rapid fire Spanish, all serve to stir the blood.
I am now on a ship rounding Cape Horn, Tierra Del Fuego, the furthest southerly point where so many sailors lives have been lost and where the Pacific and the Atlantic meet in roiling fomentation. The wind and sea are contentious. The ocean is a boiling cauldron, a heaving vortex of spuming movement set against undulating cliffs punctuated by wild cloud and a moaning, pummelling wind. I can see why they call it the horn, there is a shape in the jagged high formations of the rocky islas that is like a horn. Here a lighthouse sits where the keeper has asked to stay for a further six months. It cannot be the social life. Beside the lighthouse is a statue that is the shape of an albatross representing the souls of drowned sailors, who it is said, return as albatrosses that swoop and cry around their shipmates. The worst was being caught on the lee side of land and being driven onto the rocky shores by the currents and storms. Ships that were damaged here were directed by their financial backers not to go to the Falklands for refit as the harbourmasters there were prone to seizing cargo after declaring the ship unfit. Imagine this now being a tourist attraction for what historically must have filled many with dread and where fortunes were made or lost in its transit. My mother was never one to mope or be idle. She did this voyage, well, I am only doing half of what she did. It was her last major trip before she died. It is a way for me to commemorate her and I draw and paint what she must have seen and in so doing, I honour her memory. The palette is subarctic. Incredibly the sun comes out and a rainbow appears as a storm overtakes the stern. In the night we negotiate narrow Beagle Channel by full moon and I am spellbound by silvery light finding sleep impossible, ever a captive of beauty. El fin del mundo they call it here.

She didn’t tell me about the fiords of Chile. Oh. Mio Dio. Try blue glaciers at eye level a couple of hundred meters away interspersed with jagged snow-capped peaks on a continuous basis for five hours. The camera actually seemed pointless. I could only stare incredulously. I had absolutely no idea this was so unbelievably superlative. Words fail me.
I mourn that Peru is so close and that I won’t be getting to it. After Peru, I would be keening for Venezuela, I suppose. Apparently I am insatiable.
“Oh world, I cannot hold thee close enough.” Emily Dickinson