“No doubt we shall have to don such apparel at some time during the voyage. Even the most salubrious and posh of vessels feel bound to humiliate their passengers with a fancy dress party of some kind, I gather.” Whispers In The Sand, Barbara Erskine

I have moved into a cabin and I am much more comfortable. Today we saw what the missionaries renamed from the Bay Of The Penises to the Bay Of 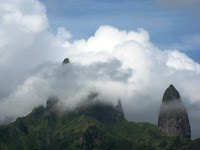 The Virgins which isn’t quite as accurate as a visual metaphor as the original. The topography is unique – I have not seen anything like it. The amazing hospitality on shore and also on the ship continues. It really is unbelievable how relaxed, loving, musical and genteel the crew is. They come from the Australs, the Society Islands, the Tuomotus as well as the Marquesas. The meals continue to be superb and I adore French and Polynesian cuisine. I am also deeply moved by the people I have been meeting, the conditions of how we live and the going ashore together creating opportunity for getting to know one’s fellow travellers.

My French has improved markedly and I am told I have a jolie accente (pretty accent). Yesterday I saw a dolphin leaping outside my window. After we leave Rangiroa we will be back in Tahiti from where I will post this blog. It has been very strange to have no internet connection for so long. I am very much looking forward to connecting with my daughters and to returning to all the comforts of home. I am now into my sixth month away.
I have loved it all.

This is my last entry. To you dear readers, I thank you for your encouragement and also the sharing. There are quite a number of people now who have been invited to this blog, from all parts of the world, and I hope it has been interesting. It is you, who I carry in my heart and who are with me now as I return to my home. 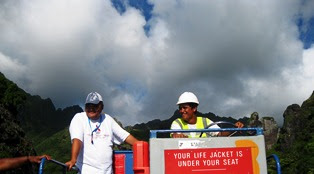 The heat continues to be humid and heavy. You know that sensation

when you open the oven and you are hit with a blast of heat? It is like that. The landscape is mesmerizing with jagged undulating mountainsides and columnar towers that are impossibly high. We are most certainly in a remote and unspoiled part of the world. The people of these islands have been incredibly hospitable. We have been entreated to Polynesian feasts three days running. We have been given food cooked in earth ovens wrapped palm leaves, ceviche, ahi, crab salads, palm hearts, bread fruit, cooked purple plantain, tapioca and poi flavoured with vanilla that is so delicate and exotic in flavour that I almost did not recognize it. We have been

entreated to dancing and drumming. When we dock the children play on the lines and the crew keep a watchful eye. We visited on Ua Pou, the grave of Paul Gaugin and Jacques Brel. I have seen marae (sites) with tiki (statues) that are quite pulsating with mana (energy). The tiki are quite fierce looking. This was a blood sacrifice culture with strong affiliations to Easter Island to the east (now belonging to Chile). In one marae I was the only person who found it and I asked a Marquesan (in French) about it. Surprisingly we were able to communicate and he said it had been inhabited until the 1960’s. I asked him when did his culture start and he said it was not known. I asked had there been any archaeological excavation done here and he said not. Then he began to sing in Marquesan, which sounds quite a bit different from Tahitian and Maori. He translated the song to me and it was all about the beginning of time, an experience I felt quite honoured to receive. This place is the same as Herman Melville’s first novel “Typee”. I have been reading his book and it is a very good record of what it was like before the French culture infiltrated it. It is written from a Victorian ethnocentric perspective.

“Among the permanent inmates of the house were likewise several lovely damsels, who instead of thrumming pianos and reading novels like more enlightened young ladies, substituted for these employments the manufacture of a fine species of tapa.” Herman Melville.

“South…. the spirit of kindness, rest and recuperation, it represents the time for meditation, dreaming and even slumber. The powerful energy of the south embodies inner knowing and calls upon you to remember who you are…. seek its power when peace is what you need.” Sonia Choquette

I have kind of lost track of the equator but it is very close. The air is stifling. I ate two croissants for breakfast. I tried hard not to. The food I have eaten since coming into French Polynesia has been entirely delicious and the French may be forgiven every snub I endured as a jeune fille au paire in Paris as a teenager, for the pastry alone. French Polynesia is still a territory of France and it is an enormous one.

I write to you from aboard the Aranui3 which leaves Papeete, Tahiti and delivers supplies once a month to the Marquesas. Yesterday we were in the Tuomotu Islands, an archipelago en route to our destination and I swam in a warm lagoon while church hymns drifted past me. They were singing Simon and Garfunkle’s “The Sound Of Silence” but I could not quite make out if it was in French. Nuka Hiva is 935 miles north of Tahiti. This morning we are going ashore to eat, swim and hike. Nine thousand people live in the Tuomotos, mostly Polynesian and one third populate this island of Nuku Hiva. I have been told that only 3,000 people visit the Marquesas a year and that is primarily from this ship. I am travelling with about 160 passengers and half the ship is cargo which we are not allowed to enter. Most of the travellers are from France and there is more a smattering of the rest of the world represented. Not much English is being spoken and I find myself stuttering to communicate while Spanish coagulates and dies on my lips and I say words and then wonder if it really was French or English with an French accent. It is starting to come back. Many people have not heard of Vancouver and I find that quite amazing. Sometimes I try to describe Salt Spring but the effort is usually more exhausting than it is worth. The food on this ship is absolutely the most superb I have encountered thus far on my travels and wine is served with lunch and dinner without charge, as is water, and the trips also that are organized on the islands are also without charge. The crew is mostly Polynesian, heavily tattooed and sometimes on the surly side, their job being primarily the ship and the cargo. Other crew members are specifically dedicated to the passengers and wear many hats, serving the dinner and then singing to us playing on diminutive ukuleles. The smell of diesel permeates everything and is sometimes overwhelming. I am getting better with my bunk which on the first night had me in a claustrophobic sweat between the heat and the fact it was about the size of a large coffin. It is co-ed in my dorm with mostly people who are older than I so I am challenged primarily on the level of privacy and space. I knew it was a challenge when I signed up for this and so I am pushing on through. It will be worth it though and I am finding myself in some rather interesting discussions. If the discussions are difficult or tedious it is impossible to evade certain characters as there is not a lot of room to move. I think

I have a different sense of space than my European companions, a trademark of the geography to which I have been lucky enough to be born. In the next few days we will be visiting such exotic locations as Tahouta, Fatu Hiva, Hiva Oa, Ua Pou, to name a few. This area is a part of UNESCO and is considered a world heritage site. I am looking forward to seeing the Bay Of The Penises that was renamed the Bay Of The Virgins when the missionaries came. It is due to the fabulously shaped volcanic geography.

Aside from the usual death and destruction at European contact with the introduction of guns, syphilis, and diseases this area was bombarded by nuclear bombs above and below ground, primarily by the French but also by the United States and Britain. It stopped when a treaty was signed by Jean Chirac in 1998. There is a really high spontaneous abortion rate at six months and the average age of death of the Marqusan is about 65 years old. And we called them “les savages”.