Under The White Big Top

I felt called. These stallion and geldings that hale from Montreal have been compared to Cirque Du Soleil. What is Cavalia was performing their second great production – "Odysseo" and it was to be under a huge tent in False Creek with Vancouver’s snow-capped mountains as the backdrop. My heart leaped with excitement, my inner child feeling the anticipation as I saw the flying banners over the dome shaped tents. I was not to be disappointed. 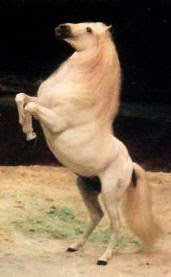 What was it that was making me cry as the performance began before a hushed audience? It was more than the beauty and magic as the scenes unfolded. I thought it might be the horses themselves, the feeling of them, their sheer magnificence expanding my heart. Gradually I settled down in admiration, applauding inwardly at how natural the scenes were without being overly contrived, how lovely the costumes, and how imaginative the use of the elements. It was mesmerizing. It took me a long time to notice the musicians behind veils up in what was meant to be the tree tops playing to the time of the horses movements so spell bound was I by the horses and their riders. It was one of those times where I thanked myself for yielding to what is clearly a memory of a lifetime. If you can, just go.