I have been struggling with some of the teaching that I am getting which seems to be pretty universal as a writing goes these days. We aren't supposed to say things like "she said sadly" we are supposed to make it like on-screen drama and show that she is sad with props and body language, "...her eyelid twitched as the wind moaned against the shutters". We also aren't supposed to use adverbs and adjectives, or to at least minimize them, which is a bit like eliminating half the English language. I am having a tough time with some of these rules. There is a lot of referencing to Hemingway's style and writing like him. I find myself gritting my teeth (see how I tell you how I feel instead of showing you - yikes).

I work at my dining room table. I try really hard to keep papers under control. If I have to do something for the house I switch to the other end of the table and if I am journaling or writing letters I move to my desk which is an elegant piece of furniture but there is no heater there. My house is like a kleenex box so getting up in the early morning I perch over one one of the heaters and hove to. I seem to think best in the quiet of the dark, and as the light comes into the sky, I remember I have to do things like eat and move my body about. It is a bit-by-bit thing, while negotiating self talk that entails questions like, why am I doing this again? I have grown used to it and am getting better at ignoring the peanut gallery chit chat and am just getting on with it.
Posted by Maryanna's Blog 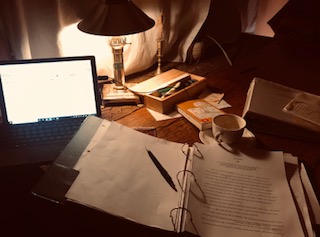 Part of being a writer is getting it out there - I have worked hard in the past with not keeping it on a shelf. I have three books I have created and market locally, all different genres, and published by Magic Cottage Creations, but now I seem to be going after prize money with the creative nonfiction stories I am working on with the university. It is more a bid to try and recoup fees, than fame and glory. If you corner an artist financially long enough something is bound to cough up. I coughed.

Feeling encouraged by the feedback from my class I sent a story out to two magazines and then tried to forget about it. The other day a package appeared in my mail box. After some puzzled hesitation around it's arrival for I could see it was a publisher, I dared to open it. It was one of the magazines, the winter edition, no note, just it by itself. I wasn't quite sure how to take this and then realized it was a lot nicer to receive a magazine than a rejection note. So I have decided to take it as a good omen.
Posted by Maryanna's Blog

One of the requirements for the writing program I am taking from Simon Fraser University is doing a public reading. I was rather encouraged by the support of my class mates and feeling emboldened appeared this month at a place in Vancouver called The Hood, a restaurant with stage, at Main and 29th. It was quite a to do for me as you might imagine. I had to write a bio. Forest dweller, really Maryanna?
https://www.sfu.ca/continuing-studies/events/2019/11/tws-reading-series.html

I had seven minutes, the organizers were quite emphatic about it, so I practiced out loud and edited the piece so that I could deliver. I made my way from the island to the big city and was rather gratified to have the support of some of some Vancouver friends who joined me.

There was a hitch. En route to The Hood we got stuck in a traffic due to an accident. We crawled five blocks in a little less than an hour. I began to think it wasn't going to happen, that I would miss my curtain call, and that it would all be for nought. My already taut nerves definitely frayed but as fate would have it, we sped through the city and made it well in time. Concentrating on breathing to calm my beating heart, I used everything I knew about public speaking, as I was introduced.

I read a story about my walk on the Camino that was mine to tell. Fortunately, I had entered a dead calm place from within the eye of my physical storm, as I read. It went well and the audience clapped appreciatively. Photos were taken and I was tweeted. I have never been tweeted before and I was trying to understand how I felt about that.

On our way home we drove through Stanley Park enjoying the lights of the city, the Lion's Gate Bridge was so pretty with art deco lighting which my friend told me was called "Gracie's Necklace". Vancouver really is a beautiful city and I always enjoy it. I am glad the reading is over but now I think I could do it again more easily, should the need arise.
Posted by Maryanna's Blog

By Maryanna Gabriel
I have been gasping a bit as probably most are for t'is the season and one wants to keep up. One of my writing courses is just about finished and between being critiqued and rewrites I have been madly working on an advent calendar for my grandsons.

I was puzzled about structure and somehow this is what I came up with. I was so excited to get to the end I rather forgot about the doors so have sent instructions that the contents may need a forceps delivery. I have gummy worms, fruit buds, sesame snap crackers, chocolate Santas and coins, the odd toy, sunflower seeds and packaged Paw Patrol cookies. My grandsons are really excited and Owen wants to know how many days is it until December first. 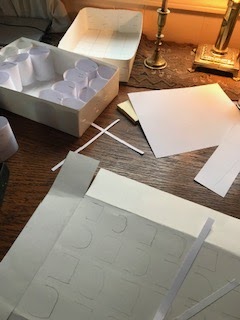 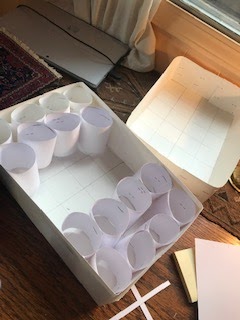 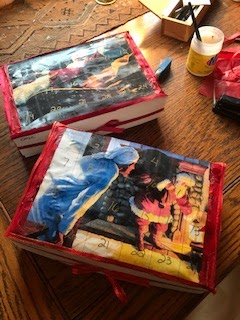 Singing Pass was a bonding experience. It was all we could talk about after we returned to school and all of these years later it seemed ridiculously impossible that we had been in such a situation. Many hikes and camping trips ensued as a group but none were as memorable as Singing Pass.

We were gathering for the first time since graduation. Not satisfied with just one day together most of us came a day or two early from some distance, as we shared walks, lunch and dinners out, photos of our families, and pure joy at seeing each other again. Our math teacher and wife were able to come. They were both so happy to see us. That night in the snow had been a life turning point for them.

Some of us went on a hike to one of our old haunts in the rain, Hollyburn Lodge on Cypress Mountain, and then later we joined the others for soup. Stories were shared and we had some good laughs. I heard tales about my father that I had completely forgotten about and which were heartwarming to hear. This wonderful photo is of some of us starting out in a sleet storm to see the old lodge where we used to stay at times. I am to the far left. 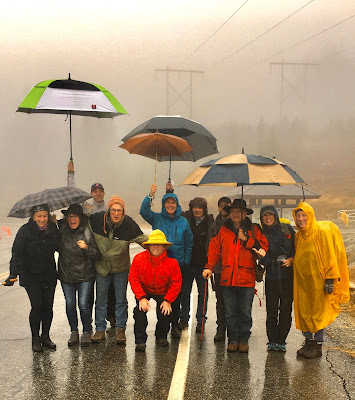 Lost In The Mountains - (part three)


Not one missing soul had found the hut in the night. They were out there somewhere in the storm and there wasn't a thing we could do about it. Too worried and tired to eat much I curled myself to the wall wondering about our teacher and friends. Eventually I fell asleep.

At three in the morning one of us got up and made food, we had hot dogs, the buns being with our friends, and most of us joined in. We whispered to each other that they may have been able to bivouac if they were below the tree line. Hopefully they were together.

The day dawned in diamond brilliance  and so we began our descent in the blinding sun. With the deep powder, I put on my snow shoes. We could see smoke in the trees. There they were in a wet huddle around a fire and just as glad to see us. Slowly their story emerged with angst around the hot dog bun dinner.

The bigger story told, and worry shared, was our teacher and wife. They had been caught between the two groups well above the tree line. Not able to go on, they had dug into a snow cave and while branches had been put down for bedding they had gotten wet to the skin with soaking wet sleeping bags. Hypothermic, they said their goodbyes to each other. It was night that would change their lives forever.

And so we were all alive and together as we made it down the mountain.

Lost In The Mountains - (part two)

It had been ten hours of hiking and we found ourselves rounding a snowy crest in the starless night, well above the tree line. Below we could see Russet Lake, reflected dimly by the snow and as we scratched our heads, we wondered which direction around the frozen ice we needed to walk. Of course we didn't have a map.
All I wanted to do was lie down. I remember thinking about the Inuit and how the grandmothers would just go out into the snow and fall asleep. It was so tempting.
We began to circumnavigate the edge wondering where the others were but too absorbed in our own survival to stop and wait. There was no stopping and waiting involved. It was out of the question. Our cheeks and toes were frozen. It is a curious warmth that starts to happen with numbness.
Someone shouted. A person ahead had just tripped over a guy wire from the outhouse to the hut which was barely visible in the darkness. We had chosen the long way around the lake - happily, I fell into the hut in an exhausted heap. I could see bunk-lined walls as someone started a dehydrated soup on a propane stove. We realized we had half the dinner and the rest of the food was with the missing members.
Where were they? They would die of hypothermia out there. A search party was sent out. One of us rifled through packs for flares.The clouds lit up as one glowing orange light was shot up into the stormy night after another. 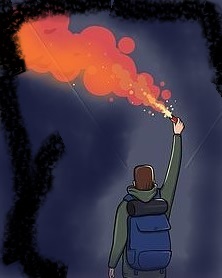 Lost In The Mountains (part one)

"Fools rush in where angels fear to tread."
- Alexander Pope

It was a high school trip. What in the world were we thinking? Hiking the mountains behind Whistler in November? You have got to be kidding me. Well, it happened.
Nineteen of us, on a school outing accompanied by our hiking club sponsor, our math teacher and wife, drove from West Vancouver to the Whistler Mountain area and headed up the trail for Singing Pass with the goal of spending the night in a mountain hut on Russet Lake. Weighted down with overnight gear, and the best of intentions, we made our way up a muddy, snowless trail with a late morning start.
Wel-l-l-l, the slow ones fell behind as I found myself leaving the tree line with the front half of the group. It being the mountains, it began to snow.
"Should I put on my snowshoes?" I asked myself. Darkness fell as the wind picked up, okay, it was a dark and stormy night. Leaning into the wind we took turns breaking trail - hard work as the drifts were waist deep. The last meal was long ago and fatigue was setting in.
Posted by Maryanna's Blog
Newer Posts Older Posts Home
Subscribe to: Posts (Atom)