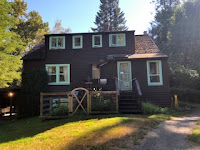 I had a romantic thing about fly fishing and have read all of Roderick Haig Brown's books. They were birthday gifts from my father. I was pretty excited to be visiting where he lived in Campbell River. I found the museum which was his old house. I went in. I could see prints of fish on the walls. An older woman appeared. She didn't look pleased.

"You should knock. This is a residence." She glared.

"I didn't realize this was private. It says it is a park. It's confusing. I am sorry. I didn't realize..." I slowly backed away. She fiercely stood her ground, saying nothing.

I fled feeling mortified. I had just picked up a pamphlet at the tourism center that said this was a museum. Then there was the sign outside. It definitely said BC Parks. There is something wrong with this picture. I will have to write a letter. 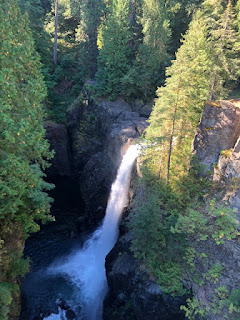 So I did. That made me feel a bit better. I am sure the provincial government was pleased to get it.
Dear Maryanna,
Thank you so much for your letter. We were so pleased to hear from you. How are you? We are sorry about your recent experience with BC Parks and next time you are in Victoria do drop by Parliament. We would love to take you to the Empress and spot you for a wee cuppa. You can tell us all about it then. Please give our regards to your family.
Yours truly,
BC Parks
I wonder what Roderick would have thought. I walked into Elk Falls that was near by and thought about him and how much the countryside must have changed since he lived here. I felt a little saddened by all of the development.

I knew it would be the last chance for me to get out for a bit of a break. I have just gone walkabout. It was only three days but it felt like a long time. From being home, the longest ever, to a drive north up the big island, I made a run for it. I slept in an old inn that had a lovely room with a slanting wood floor and a 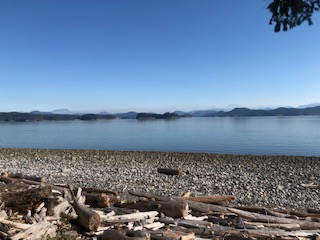 view of the ocean. Later I watched an Orca break water and breach. That was glorious. I felt the spirits of the forest, reveled in driftwood, and the lovely rounded granite rocks that graced the shore.

The smell of smoke had been in the air before I left. As I returned, the entire sky was gray. The smoke has spread for miles, not just up the coast but across the interior of British Columbia. The pain of the people and of the land to the south of us is making itself felt. It is hard just being with it.

Clams I bought, grace my kitchen. I am making chowder and linguine. I am thinking of smoke over water and of the beauty of this wonderful world that is so fraught. 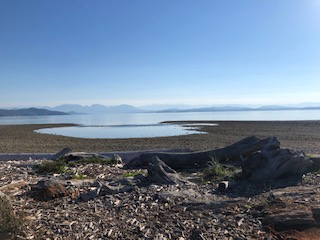 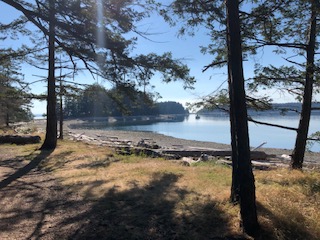 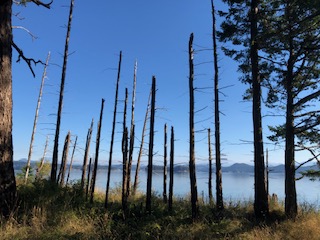 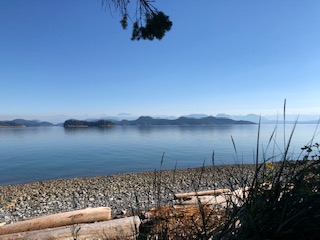