Not Normally A Whale Whisperer 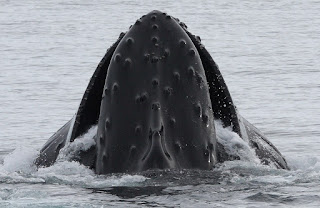 The Bamfield area has a wild and rugged coastline and it was with some trepidation on my part a friend and I scurried out by kayak to experience it first hand. I am a timid kayaker when it comes to these things with a healthy respect for the sea. Better alive than dead and all that. I quickly learned the best way to handle the ocean swell was to bob like a cork and paddle as one could with the thought that the skirt covering the kayak hatch would actually work as I succumbed to the rise and fall of the swell. We espied a whale rub, a kind of cliff where the whales come up and have a scratch. I was astonished to spot a whale there. He seemed huge. Suddenly my stomach lurched and not that I am normally given to whale whispering but I just "knew". I yelled at my friend. "Back up!!!" There was no time. "Reverse rudder!" I commanded like some deranged u-boat captain my voice laced with fear. I madly paddled backwards as I faced to sea. My friend had no idea what I was up to and why. One thing was sure. The whale was coming. How did I know? It was just a sense. I saw him. He saw me. He dove. He wanted to impress. To show off. Me. It was for me. The point was where was he going to breach and were we going to be over him when he did? Adrenalin and dread simultaneously pounded through me. In an impossibly quick moment the whale did breach. Oh my Lord in heaven.

A woman who works here at the local flower shop told me this funny story about American tourists asking her what time do the whales come by? I know. It is a question to really stop one in one's tracks. It is almost impossible not to want to really go to town with that one. At one point though, in 2002, whales came into our Salt Spring Ganges harbour and locals did go to town. The show went on for hours. Several Orcas, probably transients, were toying with a much smaller Minke Whale. Businesses and schools closed to watch and as word out got the crowds swelled. It seemed it was a kind of bullying for fun for the Minke was never quite hurt enough to suffer a lethal blow, it was just never released from being cornered. As it would try and swim away the bigger Orcas blocked escape. Biologist Dr. John Ford came to Salt Spring Island to talk about it and I went to listen. He recounted the Minke was later found floating out to sea with the cheeks bitten out and the rest of the body intact. The Orcas had drowned it. This brings to mind a whale tale of my own in my kayak on a wild and rugged west coast which is the subject of my next blog.
Posted by Maryanna's Blog


Some clues from the past are like little letters from the ancient peoples that lived and may be found in
petroglyphs. Petroglyphs are images pecked out of rock. We have a lovely huge petroglyph in Drummond Park on Fulford Harbour which has been entitled "Seal". Also in the area is a bowl that is pecked into the rock which some say is shamanic. It was made famous by Phyllis Webb, a Canadian poet, who lived in Fulford at the time. She called it "Wilson's Bowl" and published a poem about it. "Wilson" was Wilson Duff, a well known anthropologist who did a lot of wonderful work and helped establish the Archaeological Heritage Board. One of my favourite jobs was recording the petroglyphs on the banks of the Fraser River for PhD candidate Doris Lundy of Simon Fraser University at the time. Two of us recorded over one hundred boulders covered in images. It was needed as spring floods moved the boulders around and often covered them in water. It was an exciting time. The man I worked with I eventually married but that is another story.
Posted by Maryanna's Blog

I went to the theater last night. Author Jon Vaillant came to Salt Spring once again with the showing of a newly released documentary film "Hadwin's Judgement" by Sasha Snow surrounding the mysterious story of the cutting down of the sacred Golden Spruce by West Vancouver born Grant Hadwin on Haida Gwai. Author and film maker have collaborated once again for both are impacting each other's work in complimentary ways. Jon Vaillant wrote "Tiger" after seeing Snow's film "Conflict Tiger" and now this same filmmaker has made "Hadwin's Judgement" after reading "The Golden Spruce" by Jon Vaillant. The film has also returned home for the one of the producers is from Salt Spring Island. The film was interesting because we are introduced to some of the people that knew our strange protagonist and who recounted their experiences of him which created an entirely new slant to a rather puzzling, and at times, shocking story. I lived and worked in Haida Gwai as a young woman for a short while and it was interesting to see how the filmmaker wove the geography into the events. As I came out of the theater I thought that in a strange way Grant Hadwin has finally achieved his goal of drawing attention to over-forestation but it is quite likely that he did not foresee his death as the outcome. In conclusion, what struck me is how he created a maze he could not find a way out of.


I have decided if ever I need reading glasses I just need to look by the parking brake in my car.
I found about six pairs there. I thought I would tell you about a recent discovery here on the island. A Japanese charcoal  kiln has been excavated in Ganges amid the jungle of foliage that is so characteristic of coastal British Columbia. It is in Mouat Park. The kilns were built by Isaburo Tasaka who lived on Salt Spring Island in the early 1900's. The Tasakas lived in the area behind Embe Bakery. Isaburo Tasaka made a living by fishing seasonally and making charcoal. It is said that he was taught how to build this particular style of kiln by the Japanese Canadian pioneers on Galiano Island and that the technique came from Wakayama, Japan. Ovens have also been unearthed on Mayne Island. These two kilns were restored last year with support from the Japanese Garden Society and PARC. Salt Spring Island's reputation for  a people of innovation and diversity has deep roots.
Posted by Maryanna's Blog
Newer Posts Older Posts Home
Subscribe to: Posts (Atom)