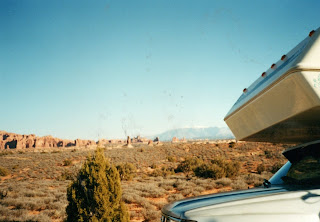 "..the most weird, wonderful, magical place on earth—there is nothing else like it anywhere."
- Edward Abbey

I didn't really get it. The warden at the park entrance to Canyonlands was saying he had never seen a woman go in alone before at this time of year. What was the deal? Camper, woman, park, so? Even although it was November, the weather was warm and I was enjoying wearing a dress with bare legs and sandals. Coming from a Canadian gulf island I was moved by the vastness of the red earth and turquoise sky and it was with pleasurable anticipation that I made my way into the park. I was unprepared.


I felt like a dust mite in an infinite universe. There was nobody. I was alone. The feeling of space which I usually appreciate, coming from where I do, somehow felt intimidating. Such a canvas. Such sculpture. The colours. Oi. For some reason I thought about the arctic and the landscape there versus what I was seeing so much further south and contrasted them, as if the same hand was playing with similar elements and media only with the desert temperatures thrown in. I had the freedom to drive anywhere I wanted. It seemed wrong. The park is over 1,300 square kilometers and the ecosystem is fragile. It takes hundreds of years to form an inch of earth. I made my way towards a tree and set up camp curling my mind around it for solace. I had beans. It seemed like the right thing to do. I may have sung on my guitar. I do not remember. I was reading a most amazing short story by Edward Abbey about a boy caught in a flash flood in an arroyo, riding a log like a leaf. I was unnerved. I may complain from time to time about not having a view but when I got this one I felt like I would pass out. Despite my tree, I did not overly linger. It was with some relief I drove out and headed towards Colorado.

It was such a canvas of beauty. I was unprepared for what I was experiencing. I had no idea. I was not sure what was hitting me the hardest. The colours in the rock formations against a breathtakingly  turquoise sky or the windswept sculptural formations themselves. It was almost hallucinogenic. And vast. In the distance were snow capped mountains. The truck wove in and around the formations as I climbed in altitude. It all felt so potent, magical, as if it was breathing,  the formations themselves seemingly imbued with spirit. The shades of red in the rock strata fairly throbbed.

I felt despair for my camera felt inadequate. It was so beautiful that any photograph failed it.  It was majestic. Unique. Unlike anything I had ever seen. For all of my life this place will be with me.There are over 2,000 natural sandstone arches in Arches National Park that is over 300 square kilometers and which was 65 million years in the making. Trying to understand the hallowed ground I had just visited I perused the book section in the park gift shop and found author, Edward Abbey. He used to be a warden here and he had published books and short stories about the experience. I came away with an armload and much quieted by what I had just experienced, I thoughtfully  made my way to Canyonlands. Utah was proving to be a most amazing and surprising place to see.

With bungy cords swinging I drove. I was trying not to overly worry about the mirrors but realizing that driving was a little tricky and it was difficult for me to gauge distance. As I traveled I was struck by how everyone looked like they were off of a Hollywood set, lean and pale, as though they did not eat vegetables. In fact there was not a vegetable in sight. From what I could figure people were existing on deep fried steak and chicken. I tried not to pine as I took in the astound landscape and headed to Moab. Being from an island the expanse of space was exhilarating.

Moab is in Utah which is mesa country  and is the jumping off point for two famous parks,


Canyonlands, and Arches. This landscape also reminded me of Hollywood sets, John Wayne movies, Thelma and Louise was shot here, as was Indiana Jones and the Las Crusade. Moab was just hopping. It is only a population of 5,000 people but it seemed to be a mecca for the young and an excitement filled the air. There were a lot of people white water rafting and kayaking the Colorado River as well as doing off road biking. The energy of the place caught fire with me. I briefly searched for a bottle of wine which seemed rather difficult. I realized I was in Mormon
country. Nobody here drank wine. I was finally able to refit my supplies with the odd vegetable thrown in but not before I stumbled upon a barbed wire museum.  I couldn’t believe that somebody was actually documenting the different forms of barbed wire over time. I was fascinated. I was reading the biography of Georgia O’Keeffe and her white water rafting trip through this area. As with most biographies I have read, I began to see the human side of her which was plenty big as people recounted tales of their experiences with her. She could be quite a difficult woman apparently. I longed to kayak the rapids but I could not figure out how I would get picked up at the other end. Never mind. I was headed towards Arches.
Posted by Maryanna's Blog 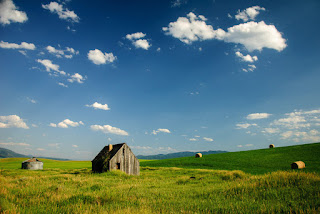 As hoped for, nobody was at the small country border. It should go well then I thought. I pulled in. A young fair haired official asked that I go into a waiting room. This was different. Let us put it this way. A very long time passed. Very. I longed for my book. He then came in and requested my purse. He rifled through it. It seemed a bit excessive. He went through my wallet. Uneasily I answered his questions. After ascertaining that the camper was new to me, he wondered if I was aware that everything in the cupboards had fallen out. “Had it, really?” I replied. I was suspicious and wondered if it was actually customs who had caused it. We headed to the back door together and I looked inside. Everything was everywhere. Groceries were spilled in the aisles and my things were higglety-pigglety in an upsetting jumble of goods. He actually blushed as I was given the go ahead to leave. In my travels, I have been through some remarkable border crossings, some at gun point, and this one was right up there.

I drove into the United States. I was in Idaho. My first act was to pull over and put everything to rights. Using bungy cords, I criss–crossed from handle to handle. Smooth rolling hills spilled away from me as a weak sun warmed the October air. I drove south...... it seemed to me I could almost hear and see the Shoshone and Paiute riding and whooping as I felt myself relaxing in pastoral a countryside. 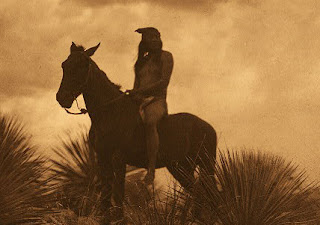