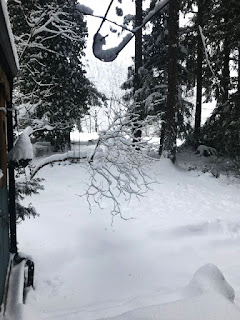 Whomp! The snow hitting the roof wakes me out of my sleep. We are in thaw melt down. Today I dragged the deer to a place that I felt was good and no, did not do it properly, rather the-scoop-through-the-snow-technique with an enthusiastic dig into the leaves, then a cover with more leaves and a topping with rotting pine needles for now. It is the pile technique. I will mound earth onto it when the snow is gone and it will also function as a visual barrier between the house and the woods below. There was talk of building a walk there which fortunately seems to have been shelved but I am on the defensive in case the future goes that way. You know how we humans are about untouched nature. Got to put signs up about how the forest is aging along with gravel paths for safety not to mention doggie bags. I said a bit of a prayer for the poor thing and thought about her family and honestly it stank to high heaven. I then came up to the house and washed everything, including the gloves. Now I feel better.

Cougars On My Mind

It is this time of year when chickadees seem to ask for more seeds as they perch on the outside rail facing my dining table looking expectantly at me. Of course I comply. I don't remember it being so deeply cold and for so long although we have had bigger snowfalls. In two feet of snow a recent trip to the bottom of the property was somewhat startling. Lying absolutely headless was a yearling deer. I stared in horror. At first I thought it had been brought down by a dog. A survey of the tracks revealed kitty-kat prints the size of my closed fist. Eeps.

A neighbour came. As we swapped cougar stories he examined the intact hind legs and abdomen. He said the brains are like a nice, crunchy snack. "A dog would have gone for the leg tendons with the chase whereas a cougar goes for the neck," he pronounced.


It puts a whole new slant on going out to the wood pile. Life on the frontier....
Posted by Maryanna's Blog
Newer Posts Older Posts Home
Subscribe to: Posts (Atom)