I have loved this little spot. It is wild and feels very safe. I have been able to totally relax. It is funny what one becomes undyingly grateful for. A slip of pebbly beach. Sleep. Memories that surface and loosen as the sun and the sea churn over them. Tide lines that are below one's gear. Silence. The book I have been reading. Milk that has not gone off. I have cherished this time with the sea. It is almost over. 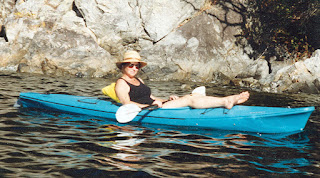 I paddle to a waterfront pub and make the call to be picked up by a friend. It was time to reenter civilization and say good bye to the silent beauty that has been such a healing salve. I order a Caesar Salad savouring the fresh crunchiness with appreciation. The waitress stared at me oddly when I told her she was the first person I had spoken to in several days. My daughter was glad to see me. Everything that was my life seemed heightened by a renewed and keen appreciation. It was good to be home.

I have been paddling and not overly far into the morning have found an island. It is a very special place. I have been fortunate to have it to myself given it is now the weekend. I feel replenished now. I am remembering the last day of school and how I cried. I do not do well far from nature. What has meant the most to me doing this trip is the silence. No words. The phone has been hounding me lately like a snapping dog. The psychic peace is a salve. I feel more balance. Out 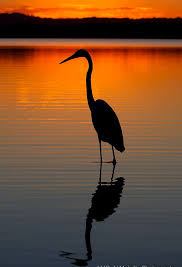 here it is so easy to just let go. I yearn momentarily for a waterproof match holder and then let that go too. As the evening falls a heron perches on the shore in front of me, silhouetted against the sky I admire his zen beauty. A flock of Canada geese come. They make funny little noises and overriding the sound is a more basal honking as if their calls are gender related. Just as I am drifting off to sleep some fireworks start up. Some big time spender on the waterfront is treating his guests. Rather than being entertained I resent the intrusion and I imagine I sense the fish retreating into the depths. The geese are alarmed. In spite of the hullaballoo my peace abides. I have a sense of being taken care of. I fancy the universe continues to deliver to me the sweetest of gifts, the way that I got going on this journey, the northern lights, the heron, the seagulls staring stupidly with long dangling things coming out of their mouths (locking eyes and consciousness with a seagull is a bit of no-mind place to be), the sweet juniper grove that I am resting within, staring at a moving jellyfish and feeling like I am looking into the membrane of a spaceship, watching mink swim right by me only to suddenly veer as he sees me, the amazing endless stars where it is said that a part of our soul resides. My heart is singing with the beauty around me. The Canada Geese talk to me for hours. I say very little in reply. Feeling I am in safe sanctuary, I drift off to sleep.

I awoke at first light as one is wont to do when sleeping on a rocky cliff perched over the ocean. I blinked and sat up. My eyes took in an unforeseen sight. The water in the inlet, all of it, was gone except for a small rivulet in the  muddy center. Rapidly, I readied to launch. If I did not want to be stranded I would have to leave immediately. Adrenalin pumped through my tired body once again as I trotted the kayak across the sand and back out of the hook. My exciting vacation, I muttered to myself. What is wrong with a nice Adirondack chair in the back yard with a lovely latte? I coaxed myself past the squirting of clams who also were interrupted with a morning lie-in. They did not seem to care what my opinion was on the need for coffee. Once back on the ocean, I began to search for a place where I could pull up and sleep. I was totally depleted. My requirements were few. I needed a place that was wild, where I felt assured I would not be disturbed, and it had to be far from houses. After a couple of hours such a place presented itself. Strange white gooey duct-type creatures hung like white glue suspended from the underside of rocks. How enticing. It would do. I spread my bag and flopped down. I slept, slept, slept. I slept the rest of that day and all of the next night. I was on the final leg of my journey.

The water was inky black as I paddled. I heard a calling from the forest. It made my blood chill. It was localized and from the shoreline, not like a bird, and not like any animal I was familiar with. It seemed to be crying, and it sounded like something was lost to it. The creature was mourning most grievously. The sound felt broken hearted to me and I wondered what could make such a call. Animal in sound but human in complaint I fancied it was one of the silkies, a human turned into seal form. There was nothing I could do to help it. I was barely managing myself. This was proving to be an unforgettable night. 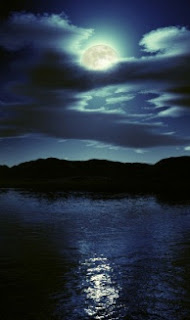 Feeling quite disoriented and overcome with fatigue, I realized suddenly where I was. This was the hook. I knew there had to be a place to land. With relief I turned inland and I entered the calm protection of the inlet. Being out of the wind and roar of the surf felt like a reprieve. Moonlight shimmered and the water was as still as glass. As I paddled, silvery fish jumped. They seemed to live in the mud and I fancied that Gollum would have liked these morsels for the whole vista seemed to me to be akin to a magical scene out of Lord Of The Rings. Weariness rolled off of me in waves and my arms felt insensible. I arrived at the end of the hook. I almost cried with disappointment. What I fancied would be a sandy beach was marsh. I waded briefly in disbelief in the sheer muck of it. Desperation threatened to overwhelm me. I had no idea how far away in time morning light was, but I knew that I needed to stop. Backtracking more carefully now, I traversed the hook once again, and finally found a ledge where it seemed I could lie. This was an unusually high tide. I pulled the kayak up beside me. I was so exhausted I collapsed and asleep as soon as I unrolled my bag, only to jerk myself awake in order to watch the hypnotic movement of the water wondering if the tide was still climbing. I could not risk losing equipment or being overcome by the surf. I blearily eyed the sea for what seemed like an eon, trying to decide if the tide was advancing or receding.  At last, reassured the tide was going out and thankful I was still in one piece, I let go and lapsed into deep, dark, unconsciousness.