Date With A Bathtub


"There are times when my spirit, weary and worn,
Longs for the peace of a dry canyon morn,
To rise from my sleep, dreamless and deep,
To the canyon wrens song."
- Bright Angel by Susan Osborn

I found myself in desert canyon country, not quite lunar, but close. It was extremely hot and tumbleweeds and sage brush decorated the roadside. I was by the Thompson River in Spence's Bridge, population 150, and have just slowed for a big horned sheep. I was happily renting a house for the night that had been built in the 1800's and where British ethnobotanist James Teit lived. This man recorded much of the local indigenous Thompson culture and was a part of land negotiations during British colonization. It seemed the perfect segue. There is a heat here that is wilting and I have gratefully retreated to the cooler recesses of the house. Apparently the trout are running. The trout are running? That is what she said. I tried to be polite as my hostess informed me that I should check the tree outside for black bears before I depart in the morning. "Oh," I mouthed silently as I mentally moved my schedule up for my bath from starlight to twilight. I went outside and nervously looking around I tried to destress from the day's drive as I gratefully inserted myself into the hot water and examined the trees. A train came by. Whoo whoo. The geography seemed to vibrate. I suppose one gets used to it. I noted the different whistles and variations in the way a conductor could make the sound. I was happy our commerce was so viable, apparently the country is moving a lot of goods. That's good, right? Do people really sleep through all of this? At least I never lived here. Hmmm. Could I? So there you have it. And I was not torn limb from limb although she really had me going. Apparently I have not gotten over the bear that ripped the tent apart when I was doing archaeology up north. Much later, after visiting my family in Alberta, I meandered west through the Kettle Valley and caught up with a pumpkin patch. Nope. I never lived in the Kettle Valley either. I was glad to catch the ferry to the Gulf Islands and home. Enough meandering. I had revisited some of my past. Time for a glass of wine and a good book by the fire. 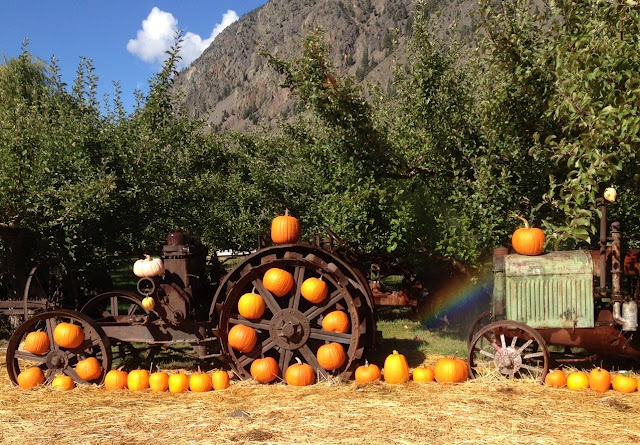 I was headed up the Fraser to a creek where we had all made camp and from where we did our surveillance and excavations. Once I assisted on a burial. Another time I was selected to accompany a palynologist to a lake that was high up. We bored for samples and he talked to me about what he was thinking he was going to find as a means for assisting with the dating of the occupations we were researching. We used carbon dating as well. For awhile I thought I would be a palynologist but I changed my mind thinking there might not be a high demand for work. I thought a lot about the creek that we camped by. It seemed to accompany the memory, the rushing sound of water we slept to and where we washed and swam.

I dove past Fountain and it was this Band that owned the land and from whom we had obtained permission to excavate. I remembered a most awful story. A woman in Fountain had fought off a cougar protecting children and in a most dreadful drama she saved them but not before the cougar ripped her apart. I shivered. This was also rattlesnake country although I had never seen one of those. I do remember a local telling me that he had decided there was no gold in them thar' holes that we were excavating. He had driven his bulldozer through a site looking. Nope. Not one speck of gold. The doctorate in charge of the research was bowled over with that one. It was a bit hard to take in and more than a little overwhelming as to how to respond to that besides the fact it is illegal. I hesitated by the road where we had all been and not a soul was in sight. I wanted to explore but it was private property and I did not have permission. It was an interesting and exciting time with lots of camaraderie and fun in addition to the high learning curve. I turned away, curious about the country I was driving through. I had a date with a bath tub and I needed to keep it before it got too dark for me to find my way. 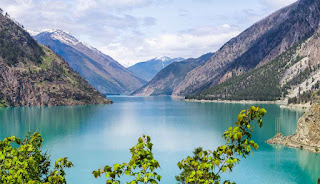 The first time I saw Seton Lake I said to myself that I wanted to live here. My wish was granted. For a short time I perched myself in a small white house on the lake drinking in the beauty of it. I had worked by the lake after all. I was part of a team of archaeologists that did research at the head of the lake at what was an extremely rich cultural deposit. It was an amazing experience and hugely rewarding. I was wondering what I was going to find as I drove down the new descent to where so much of my past lay. I got out. I was relieved to see that it was relatively pristine. No condo's or hotels. In fact, it seemed to be commandeered by BC Hydro. A road switch-backed through what was the site. Access to the lake was controlled by a gate and a brick BC Hydro Building stood where I knew we had excavated. Hmmm. Being out of the archaeology business I imagined they paid their due diligence. Sage brush and pine trees surrounded me as I remembered the people that I shared this experience with. One of those people eventually became my husband. I sighed as I observed a complicated canal connecting the lake to the town of Lillooet. The town is on a dusty plateau that overlooks the Fraser River. I remember back in the day that the local pub had two entrances, one for the whites, one for the First Nations people. The memory was so Alabama. I remembered characters of the town I had made friends with. We had to do a lot of interviewing at times as we researched. One of the projects was working for PhD candidate, Doris Lundy, and our job was to record the petrogylphs that were incredibly prolific. It was such a lovely job. I pulled myself out of my reverie. It was time to leave Seton and I got back into the car.
Posted by Maryanna's Blog


We all remember our first car and mine was a blue Volkswagen. I think it cost $200. The windshield wiper fell off. I drove the Duffy Lake Road once in the pouring rain with my hand stuck out of the window as I manually cleared the window. Oh boy. It was a dirt road then of course and impassible for half of the year. The joys and folly of youth. I used to take the "Bud Car" through here as well. It was a three car train that would leave the north shore and go to Lillooet for a nominal amount. Comfortably one could eye the rushing rivers, sparkling lakes, and snow capped mountains. It really is a beautiful area. On this day as I drove, playing with memories, I noted lots of new parks. I was surprised by how nice the road was. It made the TransCanada look like a cattle trail. Old barns were down which always makes me feel a bit sad. I wound my way up switchbacks carefully noting picnic spots. The car came to a halt. An astonishingly long line of traffic lay ahead. I was not alone on the road after all. The cars were lined up for miles. We were not moving. I was hoping it was road work. Undaunted I pulled out my picnic basket. I am a picnic pro and I was prepared. Relaxing I enjoyed the sun hoping for the best. After a very long time a black helicopter flew over us. Oh oh. It was followed by police, an ambulance, more police, and a motor cavalcade. We slowly inched forward. Sorry someone was hurt and disgusted by the congestion I pulled over. So much for a wilderness adventure. I might as well be in a shopping mall in Richmond. I nibble on cookies and slowly sip tea from my thermos while inhaling the pungent smell of mountain fir. At least the road was uninhabited. That was something. A tour bus goes by. Tour bus? Then another. Disgusted,  I start to count. By the time I get to six I had arrived at a place I dearly remembered and loved, beautiful Seton Lake.


The road to Whistler has always given me the jitters. When I was in high school a huge boulder came through the roof of a moving car and killed a class mate. I tend to drive the highway a little on the fast side fending off a head ache. It was a beautiful day though and the new highway was a breeze. I am always a little startled by Whistler. We came here to ski as a family when I was young and after high school I lived here for a time working at a local restaurant and also at the top of the mountain in the cafeteria. I loved the ski down the mountain, five solitary wondrous miles, that came out at the garbage dump. It was a big deal when a portable arrived that was the liquor store. It meant we no longer had to drive to Squamish for a bottle of wine. Trying not to feel like an old gaffer, the Whistler I see before me astounds me. A Fairmont Hotel flanked by exclusive shops exist where the old garbage dump was. A traffic light governs the turn off to our old house and I see they have named it Zeppo Lane. Zeppo was our next door neighbour. He was Finnish, I think. He was a tall strong man with a thick crew cut and a heavy accent. I remember how he swung his ax and parted vast piles of wood like butter. One day he drove home late at night, parked his car, passed out we think, and froze to death. I sigh and turn down a street that is suddenly four lanes and realize I am on the wrong side of the road. I am caught as there is a huge concrete divide preventing me from moving over. I try not to panic. Cars honk and people yell. Very relaxing. I take it as a sign. It is time to get out of town... and what is the average price of homes here, I wonder to myself as my heart beat slowly returns to normalcy. Development that used to peter out three miles past the gondola seems to go on and on with expensive homes and condos. I stop at Green Lake and admire beautiful Wedge Mountain, one of my father's favourites. I was curious about the drive ahead. I had not been on the old Duffy Lake Road for decades. It was since before I was married in fact. What was I to discover I wondered?
Posted by Maryanna's Blog
Newer Posts Older Posts Home
Subscribe to: Posts (Atom)