This county assails ones senses in an exotic kind of a way. I didn’t realize it is one of many islands in Indonesia that includes Jakarta, Samoa, Lombok and thousands of smaller islands. Bali is an island that is roughly 80 by 300 kilometers. It has a population of 4 million. The average wage is around $120 per month.

It considers itself to be the spiritual center of Indonesia. It is a melange of historic influences and neighbouring cultures, some I recognize and other references I do not. It is a confusing hubhub, or vortex of chaos, and a desperate place in the sense that the people are poorer than I understood. I am not comfortable being harassed, ripped off or in a blatant patriarchy so I am I happy to be with a tour that is together. Our guide is Balinese, we are seeing the underside of Bali, and at the same time I feel that I can relax. There are art and carvings everywhere. Prayer is called by priests three times a day throughout the towns and each town has at least three temples. It seems to be melange of Hindi, Bhuddist and Muslim with strong oriental influences. Offerings and shrines are everywhere. They are little banana leaf baskets with offerings of flowers and incense to give back to God in gratitude for what has been given. I am travelling with an average age that is much older and again with people who are from all over the world. 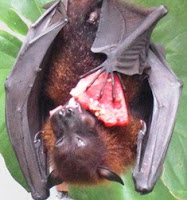 I have been seeing my first cinnamon tree, it is so much sweeter when the bark is fresh, seen a mongoose coffee place with mongooses for the most expensive coffee in the world (the coffee bean is eaten by the mongoose and then excreted – I passed on giving it a taste, thanks), been exposed to fruit that looks like sheep brains and tastes like blue cheese, seen the largest temple and been assailed by sellers, faced certain death in a the cab drive from the airport in the insane traffic while the driver appeared to have his eyes rolling uncontrollably.This is a photo of what they call a Flying Fox clutching a piece of water melon. Today I go to a waterfall and hot springs. Next week I am going to Lombok. A glass of wine is three times more expensive than the dinner. They are big on fried rice with satays and peanut sauce or wrapping meat or fish in banana leaves. There is lovely fruit here. Flower petals decorate the beds in our rooms. I miss my girls terribly. May you have a wonderful and precious Christmas and know you are in my heart. Thinking of you all.... 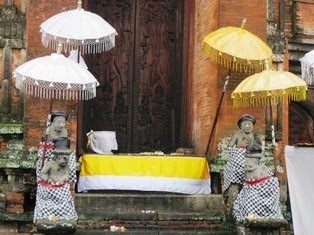 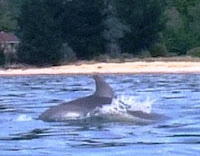 The news from the front is that we passed Peter Jackson and crew filming The Hobbit on a river an hour north of Nelson a few days ago. Kiwis back up their own. It has been suggested that should New Zealand become a sovereign state they would like to replace the image of Queen Elizabeth with his. As he hails from Wellington it was proposed they name the airport after him. He said, “Why would you want to name the airport after someone who could potentially go crazy?” Maybe he was filming that day. I am certain he will have a place in the museum right next to the All Blacks exhibit in the future.
The north island has four national parks and the south island has nine national parks. We spent a night by a river in a lovely lodge. I was fortunate to be able to kayak in Abel Tasman Park and an enormous pod of dolphins came right around us moving very quickly. There were hundreds of them. That was a sweet and extraordinary experience. We have been introduced to some local colour and characters and right now we are in Franz Josef Glacier Park. I wouldn’t have said I am a glacier snob but I am not going to mislead you. Canada has this covered, thanks. I have kayaked in Juneau in front of a calving glacier, the same in Stewart/Hyder, voyaged up the coast all the way to Skagway past some stunning glaciers as well as stared in gob-stopped wonder at what lies between Banff and Jasper to say nothing of the Icefields Parkway, a stunning and beauteous experience. We have glaciers that hands down don’t even come close to this receding icefield halfway up the mountain here. I kept my money thanks (do we charge in Canada? I don’t think so) and was more impressed with hot pools with stones and ferns and spent the morning lolling in a heated “glacier pool” and trying to figure out how I could build one. I am off to kayak a Lake Mapourika. I am looking forward to visiting Queenstown and Milford Sound. My daughters are spending Christmas with their father and I am getting ready to say goodbye to New Zealand, taking advantage of being down under by making an excursion now into Bali. 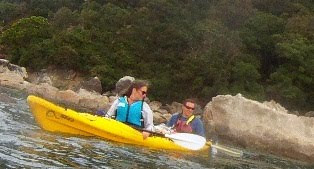 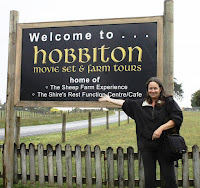 Yes, it is true. I have been to The Shire. They were filming the movie The Hobbit and the prequel to it up until two weeks ago. Peter Jackson and company are now down in Queenstown filming the rest. I was just thrilled to see it. The gardens and some of the props to the set were still there, including a vegetable garden. It was all created so charmingly and lovingly. It was quite an enormous area where The Shire was recreated and the hobbit houses are extensive. I wasn’t sure what was more amazing. The set and the fact I was seeing it so soon after the filming or the amazing company I was keeping. The bus driver had me laughing so hard I thought my sides would explode. I also met a great guy who proved to be wonderful company. People are travelling from Europe, mostly Britain, in droves. While others were jumping out of planes I went sailing on pretty Lake Taupo to see rock carvings. We also had further exposure to the Maori culture in Rotarua with a wonderful feast they cooked for us. Here were amazing geothermal pools that gave off steam, much like Yellowstone, and the town reeked of sulphur. Driving south we passed active volcanoes and plains of what looked to be lava fields. It is all about adrenalin with this group, whether it be jumping out of planes, bungying off of cliffs, white water rafting, or underwater caving. While all this has been going on we make our way to interesting places and I realized that if I wanted to eat I was going to have to carry it with me, food not being a priority. I now carry an assortment of plastic spoons, crackers, tangerines and what not. We are just getting ready to leave Wellington, which experiences frequent earth quakes and now we head south.
Posted by Maryanna's Blog

Kia ora. I feel immediately at home here. Landing could almost have been the Vancouver area and the drive in to Aukland could almost have been Granville Street. I read that New Zealand separated from Gondawarra (of which Australia was a part of) over 80 million years ago and 75% of the plant and birds are completely unique to here. Aukland is built on active volcanoes. They seem pretty philosophical about it. (“Civilization exists by geological consent, subject to change without notice” Will Durant, an American historian.) These people are so mad for Rugby they even have a display for the All Blacks in the museum. The national symbol is the Kiwi, a bird which is a descendent of the Emu and the Kiwi does not fly. Aukland lacks the humidity I experienced in Sydney and I seem to need my sweater today, however when the sun shines it burns. It is full on summer. When the New Zealander’s talk there seems to be a mumble that gets progressively worse and towards the end of the sentence the volume is barely audible all of which is clearly interspersed with a pronounced British accent. I learned today that the word Maori is said with a roll of the r and that all r’s are rolled in this tongue. The Maori language is very much in use. I saw a Maori cultural performance at the museum that was wonderful and saw the Haka which the All Blacks mimic before they play. Haka is a performance that is threatening and where the tongue is protruded and is meant to instil fear in the enemy. The dancing I saw seemed so much like what I saw in Hawaii and Tahiti except that the hula is replaced by the waving of the hands and the eyes are widened a great deal. It is very beautiful and graceful to watch. It seems to me that Fiji is more influenced by New Guinea and Samoa and that the Maori’s are descendants of the Polynesians. The Maori culture, like our First Nations, have strong carving and artistic traditions. The Maori had gardens. Their weaving to me is in part, like our Coast Salish. Their traditional house is made of wood, and is called the marae, and is considered representative of the human body. The door is the tongue, the interior is the embodiment of the tribe, and the eaves represent the arms and legs. It is ornately carved with tiki or amo and depict fertility or genealogy much like the clans of our tribes. It is tapu for women to carve. I am in seventh heaven. I am now in Cormandel Peninsula at a place called Hotwater Beach. It is geothermal and if one digs holes in the sand the water is extremely hot. People were bathing in the pools tonight and there were shovels everywhere.I am travelling with a tour group that is a bit startling. I am the oldest and the accommodation is coed. There is a young man getting undressed in front of me. It should be an interesting two weeks.
Posted by Maryanna's Blog
Newer Posts Older Posts Home
Subscribe to: Posts (Atom)