By Maryanna Gabriel
My class mates have been telling me I have been holding back in my writing. It is interesting feedback as I have been doing nothing but write about the world as I see it through my eyes. I would think this speaks volumes. So now I am searching for the threads that connect my story to a deeper part of myself. 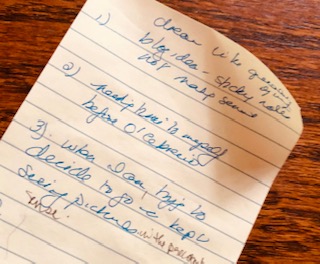 Sometimes I might be doing something else completely and fragments come in. I think, "I should put that in." I rush to a yellow sticky note and scribble a few phrases down to help jog my memory. Later I return to where I was and stare at the sticky notes in dismay. Gibberish. It is like a dream sequence that has melted away as one pours the morning coffee, an encryption, a mysterious message from a dream portal that makes absolutely no sense. I put it in a folder and hope that the message will come through again.

Somehow it feels as though something precious is not being made use of, that I have missed the boat and the ship has sailed, that the book is off writing itself somewhere with a more attentive authoress and I am not at the other end of my own pen.
Posted by Maryanna's Blog

Improving The Shlepping Around

By Maryanna Gabriel
I was so inspired by the beauty of a hotel I saw last night on the Amalfi coast, in Italy. It was converted from a convent built in the early 1600's. It only had twenty rooms, each room named after a medicinal herb used by the nuns that lived there. Past 400 hundred year old gardens, the infinity pool on the edge of the cliff, blended with the Mediterranean beyond. It was so beautiful it made me gasp. I got up, made a lemon balm tisane, and decided to change into heels and a more elegant dressing gown. It felt fun, as though I was participating in graciousness somehow.

If I were Barbara Hutton, one of the richest women in the world, I would have gone there. Then again they had no internet when she lived, but if I were her, and being me, I am sure I would have made it to the Amalfi coast. I would have gone disguised, and travelled with pseudonyms, disappearing into beautiful settings, reading my book under lemon groves and reappearing in the cafes of Portofino, or on the Orient Express, leaving big tips and hearing people's stories. (Barabara had several marriages, was relieved of most of her fortune by her husbands and died of a heart attack.)
I feel as though I have been on vacation. It beats shlepping around.


Things are starting to heat up. Dalhousie has accepted me into a master's program. This is great, right? There are many stressful details to attend to as a result. Such as where to put commas. I should know that. One has to say soothing words to oneself, and hum quietly from time to time. Commas are not a priority, I say, as I try to stand away from where I work.

I am doing my best to slow down time. A small window of freedom is left to me. I need to get past Chapter 32. How does one do that?

I have been stuck on this chapter for days.... it is tangled - I have been too long away. I understand about a certain author who sleeps with her book while she is writing. I almost need that. There are so many ways to get distracted, not just distracted, downright derailed.

So I have a new strategy for slowing down time. 1) Not checking my email until past noon.  2) And shopping... forget the seven in the morning grocery shop. For some reason all those people with face masks and hand-wipe rattle me. 3) I set my timer so that I get up and walk or do exercises. (I have writer's bum, sometimes confused with cookie legs.) This alarming diagnostic is accompanied by joint stiffness.

Often though the timer will beep on and on. I am on a train of thought I cannot drop. So the timer sounds off and I write. It is odd, I know, but I do feel better about making progress.
Posted by Maryanna's Blog


A garden is a delight to the eye and a solace for the soul.”
- Saado


I notice myself regressing. Thinking of simpler times. I realize my thoughts of Cheerios and Shreddies are a reversion to childhood, seeking comfort in the memory of a world that was less complicated.

So I have been escaping to my garden. Recently I read that a cracked egg under a tomato plant produces a much lusher plant, so I have tried it. I hope the raccoon leaves the plants alone.

I also have implemented a new way to grow potatoes that is space efficient. I am supposed to put straw down, then compost, then a layer of potatoes and repeat. I have gone from what would take 16 square feet to one square foot. If it works I can grow so much more.... vertical gardening is on my mind. It is healing.