All very exciting. One of my writing pieces is being published with Simon Fraser's The Writer's Studio. It is an extract from a longer work that is being shaped and sculpted (in between brush strokes) from my walk on the Camino from Southern France, to Santiago in Eastern Spain.

I have been working with an editor. She rejected one grammar suggestion and was very good about incorporating edits that I felt it needed and I was not too bad in accepting hers.

All and all it is a bit of a thrill. I have also sent cover designs to the journal but not sure how that is going to go over. It was a fun reprieve from my brain to sit down with my drawing pencils and watercolours.
Posted by Maryanna's Blog

Every summer when the weather is beautiful and people are pulling out the barbeque, I 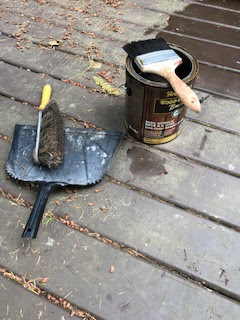 face my decks. I need about one week of good weather to pull out the tree bits in the cracks, then wash and stain them. I am not really happy during this arduous process, in fact it is best if you don't talk to me at all during this annual ritual.

This year, in a fit of surrender that is rare for me, I hired, well, let's call him Bob. Bob said he would come and I was so happy I felt spurred on with the task and actually made fantastic progress. Bob never showed. He emailed to say he was really busy but did I still want him to come? Why yes, I did.

With this piece of news I felt spurred once again and did another huge section. Again Bob never showed. The truth is we have done this four times now. I am almost finished and Bob has yet to make an appearance. I am calling it the Bob Effect. I have stopped muttering that I need to move into a condo and the place is looking fantastic. Love Bob. Great guy.
By Maryanna Gabriel

As if the sign wasn't enough, the weird female voice piping through the BC Ferries parking lot 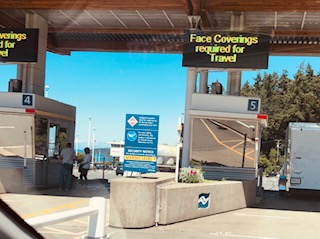 about a global pandemic and it being mandatory to wear a mask to board the ferries, had me feeling I was in a weird science fiction movie. I half expected a Star Wars crew to materialize beside me with their droids. It was something about the sound of her.

Do other people experience this feeling of unreality? I felt I had traveled a time warp into a weird alternate future and could I please wake up to well, the past.... I suppose.

Realistically, given our trajectory, what other alternate realities should I/we be preparing for? Sometimes it is all feels like a bad dream.
Posted by Maryanna's Blog

Stars On My Toes


I have just come through an online zoom conference of nine days. It was with The University Of King's College as an intro to the MFA.

I was glad to be home for it. I think if I was trying to fly from the west to the east coast of Canada to where it was held, which was Halifax, I would have felt mentally thinner. There are some benefits to this strange time we live in with a global pandemic. As it turned out, even with the support of being in the comfort of my own environment, it was intense. I read aloud a section from the walk I did on the Camino. This walk will be thesis for the next two years. A book. It seems so brave to be saying that.

Of course, zooming from one event to the next required a regimen of self care. Trying to keep the circulation going in my body between sessions seemed important. Now that it is over, my website has come online and is working perfectly after several grief filled episodes with my web host these past few days. Such is life.
This is my first born grandson's beautiful drawing. I thought it looked so much like how I felt doing my public reading. I felt the love and read with stars on my toes.
Posted by Maryanna's Blog

The Murder Of Jennifer Quesnel


The murder of Jennifer Quesnel, aged 41, on June 1, 2020, rocked the community of Salt Spring Island. Her estranged husband lay in ambush, shot her twice, then killed himself. She was still alive when the RCMP came. Then she died. They used to live at the end of the road where I live. This is a quiet island. The news was a shock.

I met her once. She came to buy a bed from me. She seemed very sweet. Everyone who knows her says nothing but kind things. My neighbour described her as being "like a madonna, an angel", a delicate beauty, who went to the same high school as our daughters. We talked about how she showed horses and dogs. What, my neighbour wondered, was she doing with  him? "Maybe she was like a horse whisperer with her husband," I said. One can only imagine what she went through.

He scared me. He smashed his truck through things left at the bottom of a neighbour's drive. He then phoned them and told them it was him. He tried to run another neighbour off the road when she disagreed with him at a public meeting. Once, I was standing at our group mail box with a Valentine's card from my eldest daughter. It fluttered to the ground when I saw him coming. I began to back up. Smiling, he picked the card up and handed it to me. "Thank you," I said faintly trying not to show the whites of my eyes.

Mostly I think of her family with the deepest of sympathy and their three boys, how some people leave a legacy of bullying, violence and chaos. This picture, a gift from my grandson, is so expressively beautiful. It goes with the story of Jennifer Quesnel, and the rain that is pouring out of the sky this morning.

As If One Virus Wasn't Enough

As if one virus wasn't enough, my website, which some of you may be using to access this blog, has had a nasty attack. Someone was trying to sell viagra on MagicCottageCreations.com which wasn't very nice. You would think if they were so smart with the technology it would be easier to just do their own. Humans, as in nature, have their share of saprophytes and parasites, sucking the juice out of other's, ghost fish without a life of their own, a virus and a scourge, living in dark places.

So with great difficulty, more of it in the mind, than the actual accomplishment, I have had to build a new site that has better security. It will take a few days to show up properly on the search engines.

All of this has been accomplished in a tight window of time as I transition from Simon Fraser University's The Writers Studio to the Master's at King's College, Dalhousie University. School is online fortunately. What I do have to watch is rigor mortis with all of the sitting.... no point in getting heart failure if I have made it this far. Off for a walk this morning. Take good care.
Posted by Maryanna's Blog 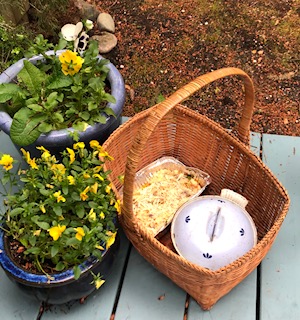 When things seem a little crazy it is always good to bake.

We have had a murder suicide here on the island. It is pretty shocking because they were former neighbours. Then when I heard that a friend down the road had slipped and fallen, breaking a few bones I knew that I would feel better if I did something for someone else. So I baked a fruit crisp and a comforting dinner and took it to her.

It was a good idea. It seemed helpful to be able to share the events with a bit of a consoling chat. With world goings on being what they are this week, it is best to look out for the eclipse on the full moon this Friday. Not that I want to go live in a closet. However, it might be advisable.
Posted by Maryanna's Blog
Newer Posts Older Posts Home
Subscribe to: Posts (Atom)