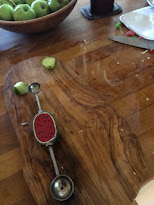 Sometimes one has things in one's drawers that are rather remarkable. For me it is my melon ball maker. It might have been my grandmother's. I have had it for twenty years and never used it. Today is the day. It is my birthday and I am having a socially distant party of bubbly and canapes. I made melon balls. I put them on toothpicks with basil.

I figure if one puts tooth picks in things it will be a canape. I also made crab tarts with parmesan, felafel bites, muharra which is a dip with red pepper, walnuts and pomegranate syrup, labneh with smoked salmon and dill, and cheese bites. It is all very exciting. I can hardly wait. It will be fun! 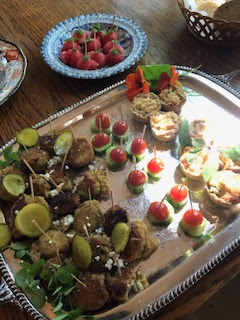 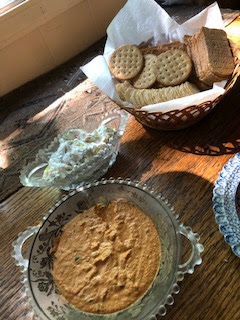 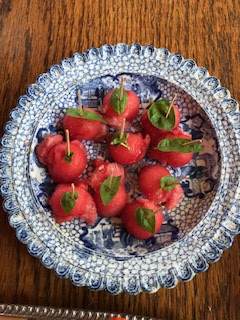 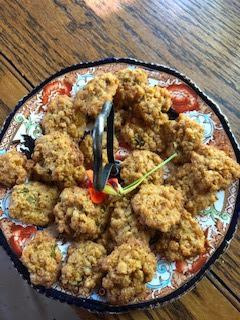 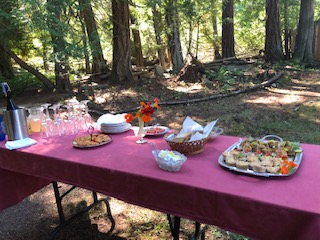 
Needing cookies is a bit of sign. It means I am craving comfort. It isn't about the men from Duncan although that provided an unexpected reprieve. Remember when I was writing about the crazy man bothering me last year? It turns out they know him or rather know people who know him. I had the feeling he would not be bothering me again. What goes around comes around. The cookie thing is something else. I have been working with a supervisor for one aspect of the manuscript I am working on and I have to stop dithering on something that is bothering me. Which is bothering me more. So I am thinking of making cookies. It might help.

The weather has turned and so I made Blackberry Jam. I hope it doesn't mean that I had the last swim at the lake. The good part about last swims is that one doesn't know they are the last, therefore, one does not feel sad.

My writing teacher and mentor, Jane Silcott, suggested this title when I relayed to the class what I was going through. Not that I am ungrateful. They came right away. I had been given the word. The septic was over forty years old and was crumbling. It was time. The news was as exciting as being told I need root canals in every molar. Worse actually. Gritting my teeth, I proceeded. 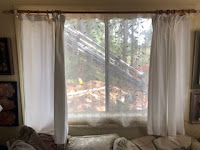 It was a shock. What I was being told, and what was happening, was at variance. The amount being excavated grew bigger and bigger. The land that I had carefully nurtured was torn up. I was hoping the trees would withstand the shock for I was barely managing.

The day after this happened, I looked out my window and saw an enormous crane. I didn't know that was coming either. A sizable rig was lifting a concrete tank into the ground. One neighbour dropped by in alarm. Four men proceeded to lay pipes and while I graciously made cookies and served coffee, I want you to know I managed to maintain calm.
It is over now. They are gone and I can flush with aplomb. It rained last night and settled the dust. I am glad it is over and I won't be forgetting the men from Duncan in a hurry. Whew. 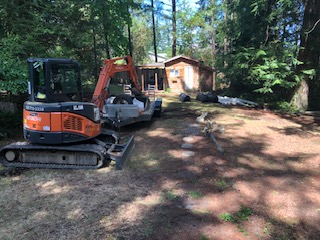 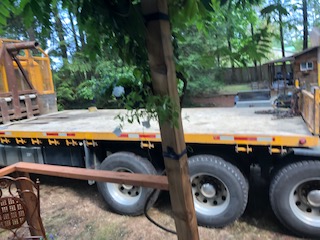 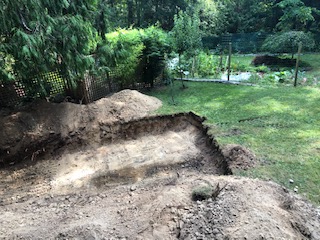 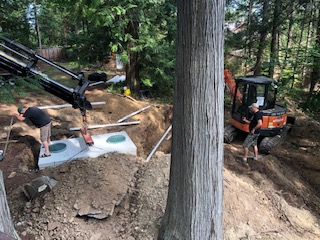 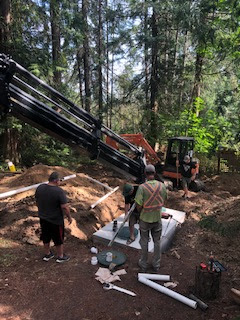 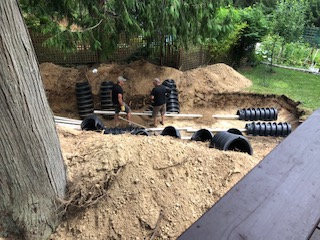 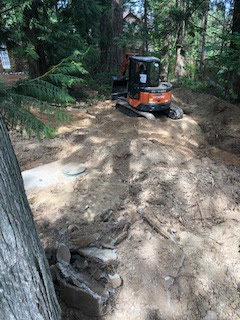 Something about the August heat brings on a surreal dreamy stillness. This is what I was experiencing early today, on a Sunday morn. I am up at dawn, on a watering mission for the plants need it with this heat. I am enjoying being home. I have done so much travelling in my life that I am satisfied with the beautiful patio I have created with a garden that is producing far more than I can eat. I am surprised so many people are travelling. The island here is packed with tourists. The summer must invite denial and the desire to flout risk.

This morning I have been to the lake for a swim. I used to relax and embrace the close time with nature but over the last few years,  I feel the need to gird my loins. There must be an app. Sometimes it is someone naked, meditating and chanting, or some optimistic city slicker with a fishing rod (I have never seen anything greater than the size of a fingerling), or garbage left by party-goers from the previous night. Today it was three huge RV's even although the road is far too narrow and a sign says no RV's.

I dove into still waters and enjoyed the exercise. Nobody is awake this time of day and it the most magical. I love August.