A Little Bit Of Sacred


"The wonder is that we can see these trees and not wonder more."
Ralph Waldo Emerson 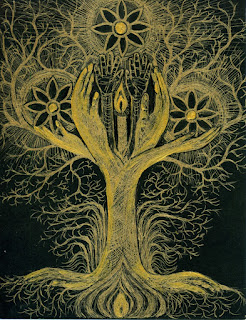 Using trees and decorating with evergreen is a centuries old tradition as we light up in the darkness of December and celebrate this special time. Not long ago I wrote a post on The Golden Spruce wherein the author, Jon Vaillant, recounts the strange and mysterious tale of the tree's passing. The beautiful Golden Spruce is revered by the Haida in the Queen Charlotte Islands. Recently I cruised a nursery and found a chip off of the old block. I pined. It took a bit of time but I saved to buy it. Recently I got all spruced up and reverently planted it. I immediately felt like I had done something sacred for the forest I live in. It felt like a counter measure in a world that often calls for one. I am routing for the little thing. Funny, it does not look gold, it looks to be a soft brushed green but the label very clearly demarcates that it is from Haida Gwaii and the great mother which is now so famous. I am kind of hoping it will dig in and spread its little roots. A fresh blanket of snow has fallen overnight. The forest looks so peaceful. I am hoping the little tree is managing. Wishing you all peace amid your boughs and a little bit of sacred.

"The pen is mightier than the sword."
- Edward Bulwer-Lytton

My father always used to say this as he was joking, "It was a dark and stormy night" and we would all laugh with him. Did you know this was actually the topic sentence for a novel written by Edward Bulwer-Lytton in 1830? I didn't. This author was widely known in his day. This famous sentence is the inspiration for an actual award for authors and the winners are posted annually. I am taking a writing course and we were recently assigned the challenge of writing the worst opening sentence we could think of, the thesis being that one has to know how to write badly in order to break the rules. What fun. I enthusiastically composed my sentence with cliche, vile punning, and outworn metaphor in mind.

"I wavered in a squirming state of nausea at the hospital entrance under a naked street lamp, the wafting smell of his cigar bringing to mind that abortion really brings the kid out of you."

I was rewarded for my effort with praise by my teacher who is a published novelist. "Maryanna, this is brilliant," he wrote. I was excited. It was very encouraging. There is something fulfilling about doing the worst possible composition. Not sure how my class mates will vote. The winner of this award for one of the grand prizes wrote this lovely sentence which is widely published.

"She resolved to end her love affair with Ramon tonight.... summarily, like Martha Stewart ripping the sand vein out of a shrimp's tail... though the term love affair now struck her as a ridiculous euphemism... not unlike 'sand vein' which is after all an intestine, not a vein... and that tarry substance inside isn't sand... and that brought her back to Ramon."
-Dave Zobel BLFC Grand Prize 2004