"Tiger, tiger burning bright
In the forests of the night."
- William Blake 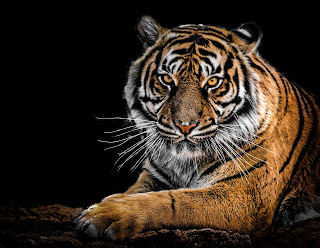 Last night I dreamed a tiger was stalking me. I pulled children into my studio to protect them but the tiger followed us, interested in going right for me. The tiger held out its two front paws and a nail from each went against my shoulders and held me. I was frozen. Then the tiger let me go. It was as if the tiger wanted to show me how powerful it was, but it wasn't going to harm me.

Stunned by the dream, I thought about tigers all day. Their power. Their beauty. What did it mean, I wondered, to have such a dream? In the end I decided the tiger is a symbol of courage and royalty and that it was a tremendous honour to have one come to me, even if it was in my sleep. They are so magnificent, aren't they?
Posted by Maryanna's Blog
Newer Post Older Post Home